Get Your Together On

It was not my fastest marathon I’ve run, but of the three I have now completed, I must say that this was the most satisfying in that I had a strong finish.

But let’s start at the beginning, in 2012, when I was originally scheduled to run this race. Of course that didn’t happen, and I chose to come back and run it this year. Throughout this training cycle, including two 10k races, I’ve felt I could have a chance to break my personal-best time, but I also wanted to have fun in this race and soak in the atmosphere, the joy, of running through New York. In my mind, they’re not mutually exclusive, but I’d go for the latter if the former becomes out of reach.

I tried not to stress myself out between landing in New York and the race, although getting into the expo to pick up my bib was a bit of an ordeal (the queue wrapped around several times on the streets surrounding the convention centre).

Sunday morning: race day. I felt nervous and excited. The rainstorm of the previous day had ended, but it was still cool and windy. The Staten Island Ferry and chartered bus got me (and thousands of other runners) to the start village within 45 minutes of my assigned start time, which wasn’t too bad, but didn’t leave me a lot of time to do any pre-stretching. I did have a brief warmup run before and after dropping off my baggage for the finish line. 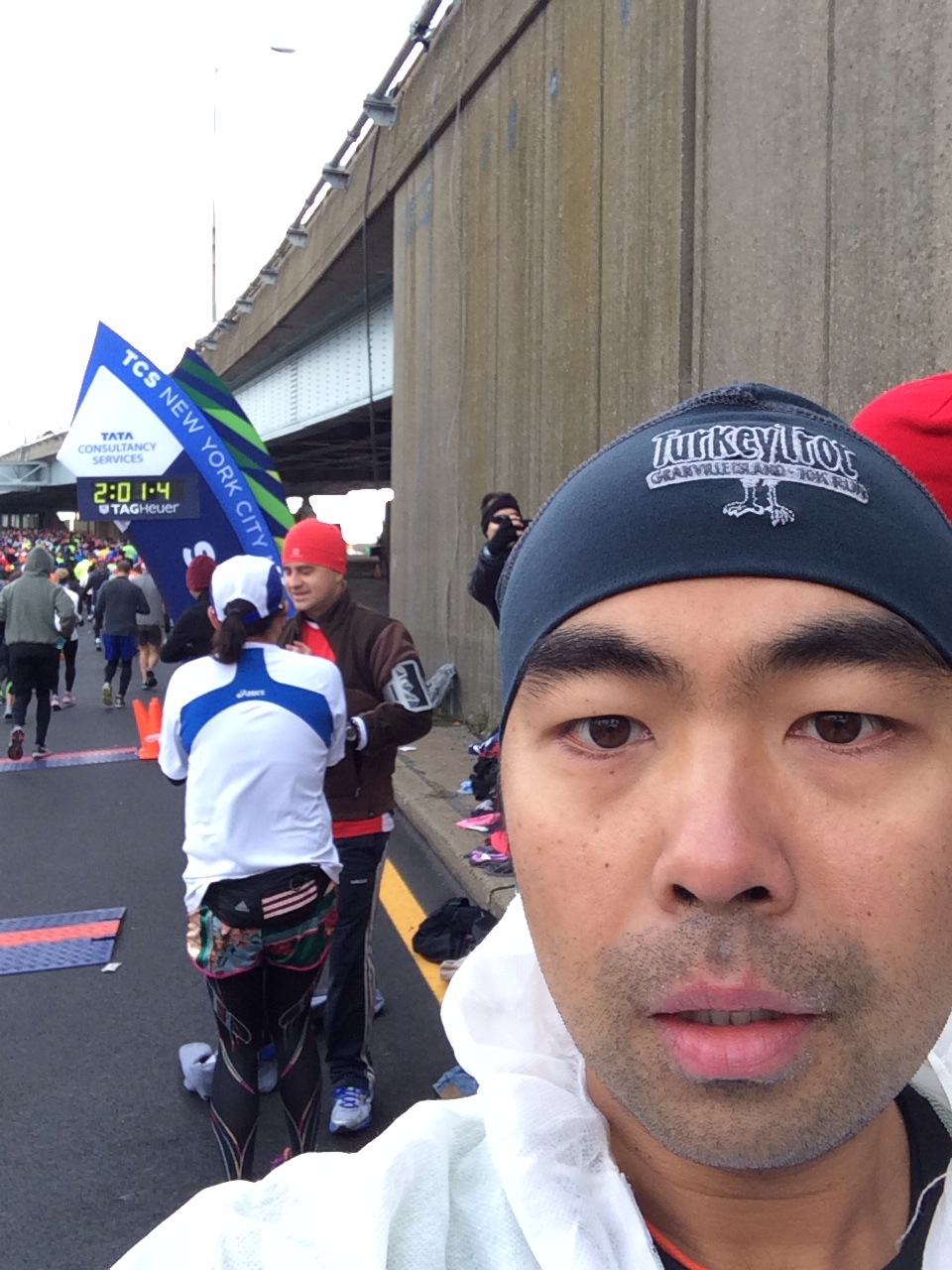 Just before the start…

Once in the corral waiting at the base of the Verrazano-Narrows Bridge for a 10:30 start, it started becoming real: I was about to run the New York City Marathon! The traditional strains of Sinatra serenading the start of the race were too surreal to experience in person. It wasn’t just me and my selfie: others were taking pictures or videos of themselves at the start line, or the view from the bridge. But the windy conditions on the bridge tempered things a little, getting runners into the task at hand.

It was very windy on the bridge, and indeed for most of the race. There were some strong cross breezes, particularly on the Fourth Avenue section in Brooklyn. Occasionally, there was a tailwind that propelled me a little, but those were the exception.

Right from when we emerged off the bridge and onto city streets, we were greeted with enthusiastic cheers from spectators. They’re as much a defining part of this race as the route, and I felt grateful for all of their support. I even ran to the sides of the street to slap people’s hands and signs or shout out to the occasional Canadian flag-waver.

I had written on my hand my intended four-mile splits if I wanted to at least match my personal best. I was to go out conservatively (around 11:00/mile or 6:50/km), then pick up speed in the 2nd half of the race. I was going well for the first 10 miles or so, but a pit stop changed things. By the time I got to the halfway point (near the bridge taking us from Brooklyn to Queens) just under 2:24, I figured I had an outside shot at a negative split, but I didn’t really focus on time too much after that.

I was meticulous with fueling. Like I did in training, I took a packet of gel every 25 minutes. I stopped at almost every aid station. I helped myself to more gels around mile 18, just as the supply I brought with me ran out. All the liquid I was consuming did necessitate the pit stops I did take, but I think it ultimately helped me for the crucial final miles.

In my first two marathons, I hit the wall around mile 20 and did not finish as strongly as I would have liked. In New York, mile 20 was in Queens, mile 21 was on the Willis Avenue Bridge taking us back to Manhattan. All along 5th Avenue, I anticipated the worst, but just willed myself to continue. The cheering crowds were a great motivator. Even as the course entered Central Park around mile 23, and my knees were about to give in, I told myself that since I’m this close to the finish I might as well finish it.

The rolling hills are definitely noticeable throughout the race, but none more so in the last two miles. The stretch on Central Park South seemed the longest of the race, but at least it was flat. I saw a sign indicating 800 metres remaining; it’s that close. By that point, the course crossed Columbus Circle and went back into Central Park for the final stretch, and more rolling hills.

This was where I knew, as the Sinatra song says, that I made it here. The flags of the participants’ countries, the loudness of the crowds, the relief of the runners’ faces: it all made for an electric atmosphere. The mile 26 marker, and one last, slight uphill. I wasn’t paying attention to my watch at this point, but a quick glance told me that I had to make one final effort if I wanted to break 4:55.

So: four hours, 55 minutes, and 15 seconds after I crossed the start line at the Verrazano-Narrows, and five boroughs later, I made it across the finish line. The elation at finishing this race, at finishing this iconic race without bonking, hit me instantly. I allowed myself a few moments to savour the achievement, before heading to the inevitable lines to collect my medal and recovery food.

(There are plenty of lines surrounding this race, and for good or bad, it’s as much a part of the experience as the race itself. From lining up to get in to the convention centre, to purchasing items from the official clothing partner, to the queues getting on and off the Staten Island Ferry, to collect the medal, food, and baggage post-race, and even on the following day back at Central Park for the official finisher gear, and to pay for that too. And there was one final, unofficial line, to pose for pictures at the finish line as the spectator stands were being taken down.) 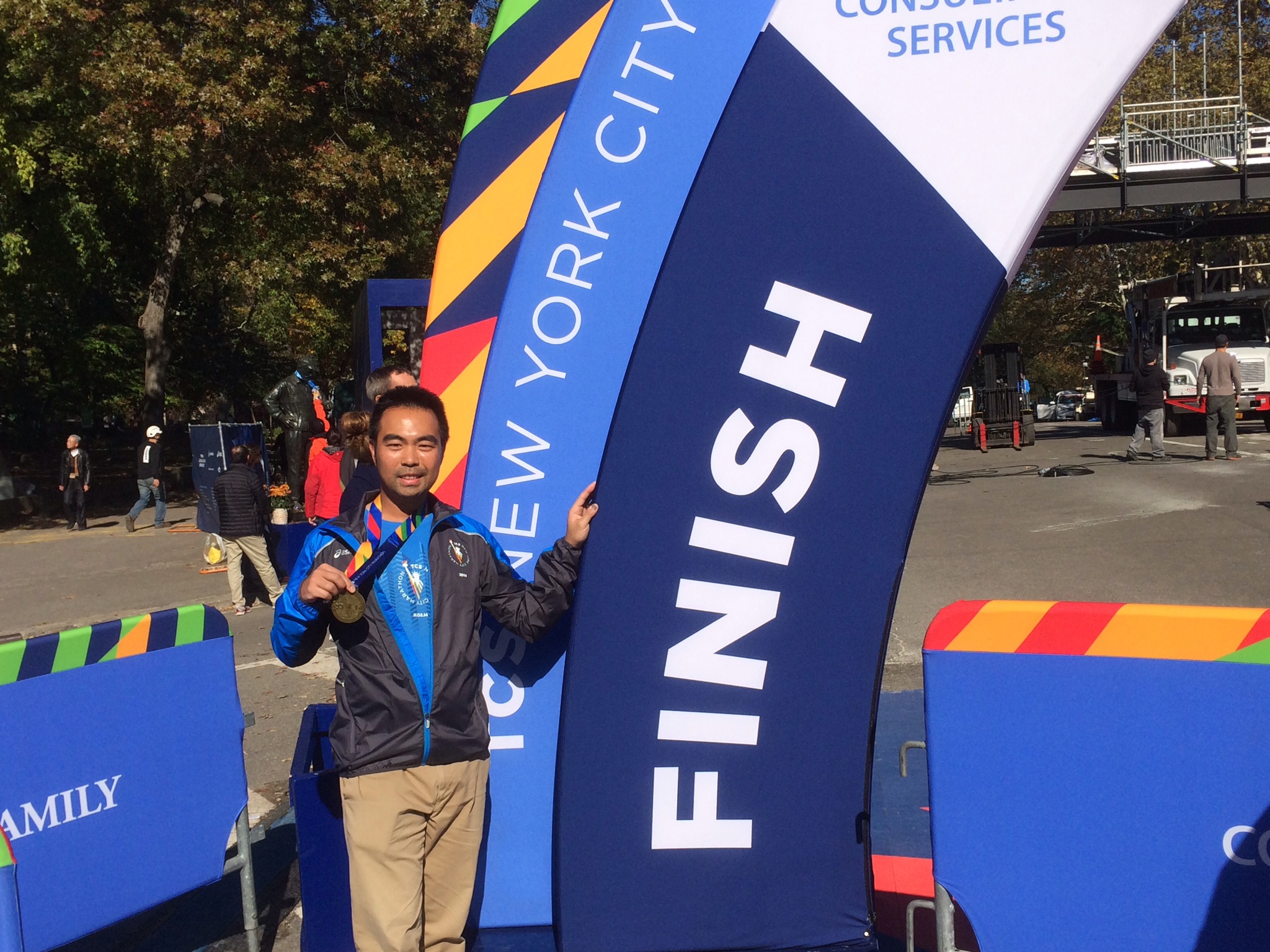 Posing at the finish line on Marathon Monday

When people put down the NYC Marathon on their bucket lists, it’s very well justified. It’s a race I would definitely do again, not just for the experience, but it’s also an excuse to return to New York. I think this would go down as one of the best race experiences I’ve done. There’s just no topping New York and the New York City Marathon. Thank you to New York Road Runners for organizing (and allowing me to return after the 2012 cancellation) and all the volunteers who helped to make this such a memorable race.

Who am I? In no particular order: a blogger (obviously), runner, fan of the Canucks, Doctor Who, and Amazing Race, accountant, music lover, armchair traveller. More Run 2016:
510 km
Follow me on